I have been working at the cemetery on-and-off for about two years, doing private, family-funded conservation work, such as the Bryan stones and the Clark/Shannon/Pickett plot below.  In late April 2017, the Independence Preservation Trust decided to partially fund work on about 50 stones, which will be completed in early 2018.  Photos of stones completed are also posted to Find-A-Grave with a notation/caption under the photo.  As of December 1, 2018, additional funding was located and another 90 stones will be conserved in 2019.

Stella Louise Bryan's (great-neice of Stephen F. Austin) stone as it was in June of 2015.

Late in 2016 after an untrained person used bathroom caulking to try and 'glue' the stone back together and reset it.

I would rather have had the stone in the first photo to deal with, as "repairs" such as this often deposit silicones in the stone and they can be very costly and difficult to remove.  Luckily, this one did not. 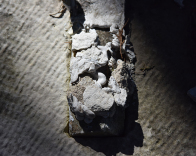 Close-up of caulking left on stub of tablet. 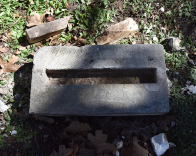 The original limestone base was still solid, and the remnants of the stone were hand-chiseled out. 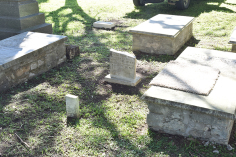 The bottom portion of the stone is reset in the base using lime mortar (as it would have been originally), and allowed to cure for at least 3 weeks.

In the upper-middle part of the photo, you can see a new limestone base I made for the stone of Stella's brother, Wm Joel Bryan; see photo below.

The top portion epoxied on, but before any cleaning.

The stone had been cleaned, but with an unknown solution; seemingly, it was not brushed as there are streaks and blotches visible on the surface. 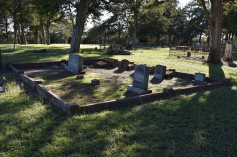 The plot as it appeared when I was hired to reset and clean the stones. 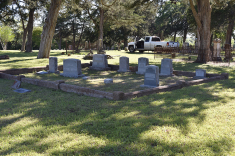 Stones Conserved as Part of the Independence Preservation Trust Funding

Conservation is also ongoing at the Atkinson Cemetery, just west of Chappell Hill, TX.  This cemetery contains many of the early inhabitants of the area and those associated with Chappell Hill Male and Female Institute (1852-1912), and Soule University (1856-1888).

Contracted conservation started at the Smithwick Cemetery, east of Marble Falls, TX in late May, 2019. 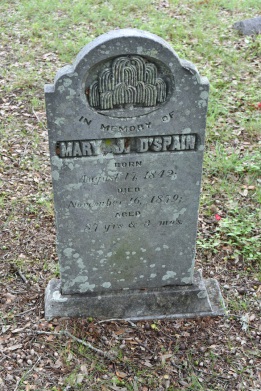 The stone of Mary J. D'Spain is made of soapstone, but the shop has not been identified.  Smithwick Cemetery contains a number of similar stones, almost all from a 20-year segment.  While the stone was very overgrown with lichens and biologicals, the D/2 used to clean it did a super job; the stone was remortared in the socket base using Limeworks.us ecologic mortar tinted with black iron oxide. 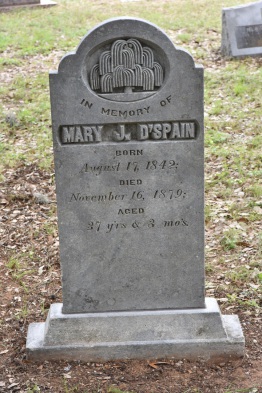 Conservtion work is taking place at the South Belton Cemetery in Belton, TX.  The cemetery was established in 1851, and has large number of Bell County pioneers and influential people from the 19th and early 20th century. 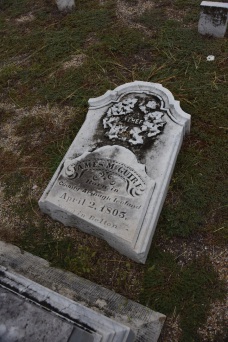 The top of James McGuire's ornate marble stone was broken in two years ago and had been resting behind the base and mid-base.  The piece weighed about 650 lbs, but was in remarkably good condition. 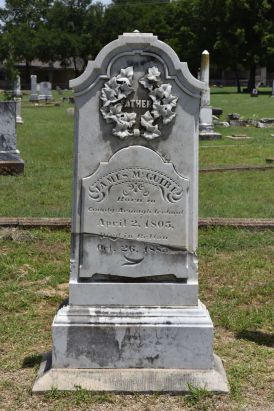 The top piece, reinstalled and epoxied.  Infilling of the joint line will be done when the weather cools down in the fall.

The monument is about 6 feet tall. 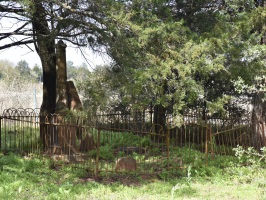 The stones as they appeared before any work was done.  The draped pedestal top had fallen off of its base and was leaning against the fencing.  The column marker was missing the urn on top. 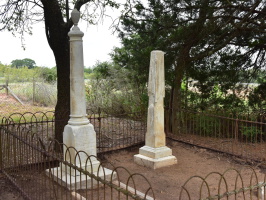 After the plot was raked out, the draped pedestal disassembled and re-set, the repaired urn replaced and both stones cleaned.

There is a great deal of information on the Internet regarding gravestones, gravestone repair, and the like.  While some of the information is truly horrible, there are reliable sites that will steer you in the right direction if you have questions or need more information.  The ones below are a good starting point; I will add more as I locate sites that have accurate, proven and truthful information, or that carry good quality tools for cemetery groups.

If you have a question about a gravestone, send me an e-mail with good, high resolution photos and I can advise you.